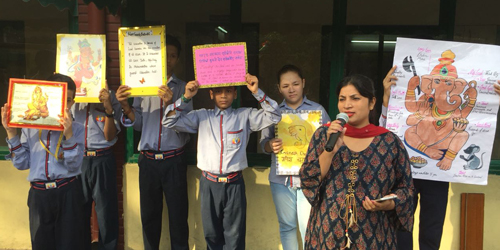 A special assembly was conducted by Prakash House on 13th September 2018 on the occasion of Ganesh Chaturthi.

The assembly commenced with a melodious invocation, the Ganesh Vandana by  Mrs. Sharda Bajaj (Music Tr.).

Mrs. Saroj Sakhuja (House Incharge) spoke about the festival and symbolism of Ganesha’s body parts and things Lord Ganesha adores and keeps with him, like his Big head which depicts wisdom and his, Big ears for Listening more.

A Ganesha Shloka was recited by Mr. Chandan, explaining its meaning and he included a short story of Ganesha- The God of Wisdom and wealth.

Mrs. Veenu put more light on why this custom of installation of clay idols of Lord Ganesha is followed from ages The idol is carried in a public procession with music and group chanting, and after 10 days of worshipping lord Ganesha, the idol are immersed in a nearby body of water such as a river or ocean and Ganesha is believed to returned to Mount Kailash to Parvati and Shiva.

The assembly concluded with the Ganesh mantra by the choir. How a single festival could unite so many diverse peoples of India was made amply clear.

We were delighted that no child fell short of either enthusiasm or poise!

International Day of Persons with Disabilities